The so called Suicide Gaul should be one of the reasons why you have to visit the amazing Palazzo Altemps Museum of Rome. Imagine to be surrounded by wonderful ancient Greek – Roman works of art, that can be seen in one of the best renaissance building of Rome. Well, in this way you can understand why the Suicide Gaul and the Palazzo Altemps Museums are gorgeous. But now let’s discover something more about this awesome marble sculpted group!

First of all the Suicide Gaul was sculpted at the I century b.C. but it is simply a roman copy of the original very anciet greek statue, which was made at the III century b.C.

Thanks to some literary sources we know that the first masterpiece was sculpted by a sculptor named Epigono. The king Attalus, king of the famous greek city – state of Pergamon, commissioned him something to celebrate the military victories and the fights won by Pergamo. Who were the enemies? A barbarian tribe named Galatians. So, originally, the Suicide Gaul was a sculpted group which embellished a sort of memorial, a monument which was used to commemorate the victory and, on the other side, the defeat.

And let’s see now this man, a barbarian, who is in the act of killing himself. We see how his hand is pushing a sword inside the shoulder. We see the blood flowing out, we don’t see the tip of the sword, that is completely inside the body. Everything is marble made, and it is really amazing to see how beautiful is this terrible gesture. The Gaul has not hope anymore, he doesn’t want to be a throphy or a slave. In the ancient world the suicide was an honorable way to be defeated, and this can underline us how important is the political value of this specific masterpiece. Showing the courage and bravery of the enemies the inhabitants of Pergamon improved  the value of the victory. But it is not the end, because the man is not alone. We also see a woman, already died, close to his feet. She is probably his wife who was killed by him. Why? Again, to avoid that she can become a slave, or something worst. And again it is another way to focus on the act of this suicide, on its value. Now it’s time to be impressed by the realism of the bodies, the naturalism of the muscles and the gestures, the amazing dynamism of the sculpted group. But it is not the end… 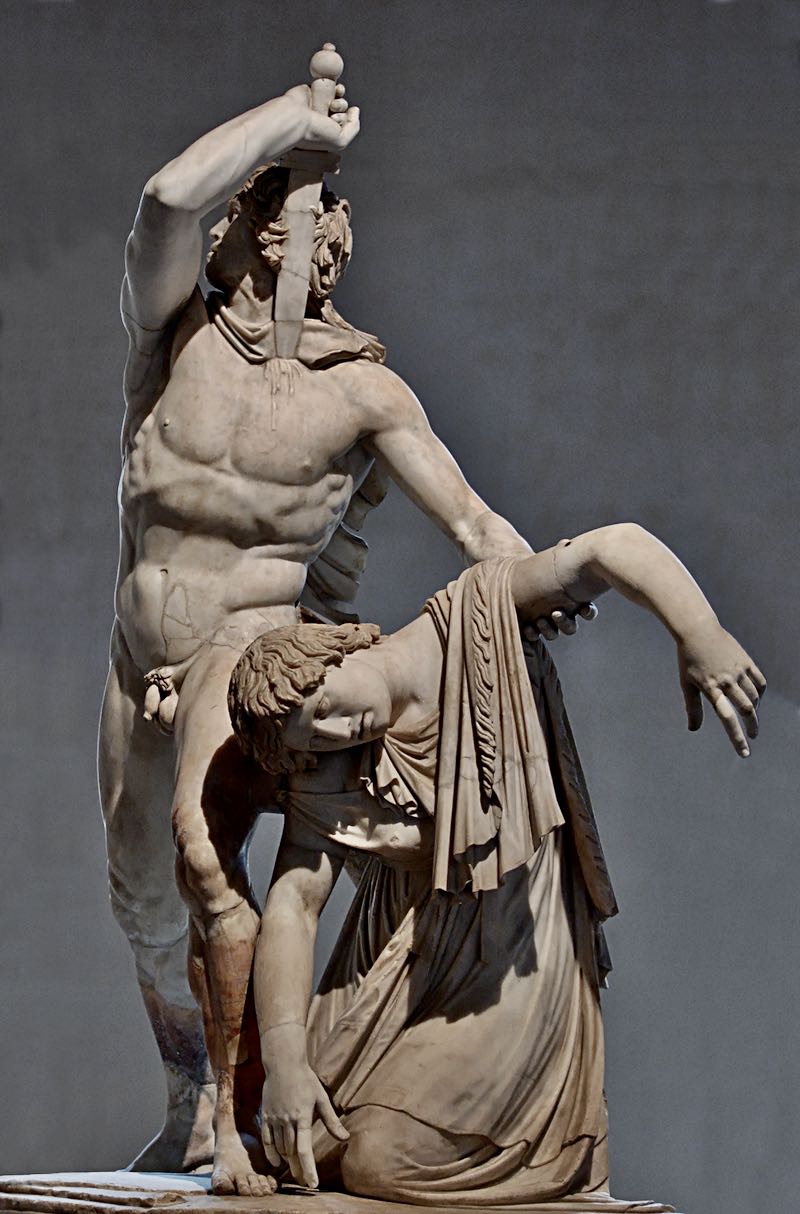 The Suicide Gaul at the Palazzo Altemps Museum of Rome is able to show us different features of the ancient greek – roman art. First of all try to understand again how art had also political and social purposes. To see an enemy who is in the act of killing himself means to appreciate better the military victory. Moreover keep in mind that this masterpiece is a roman copy of the original greek one. So it is another way to understand how the ancient romans used to get in touch with the greek art, so much that sometimes they simply copied some masterpieces, replying them. The last surprise is related to the real origins of the first statue realized at the III century b.C. at Pergamon. Maybe the sculptor Epigono was inspired by an epic poem named Posthomerica, where are described several scenes from the war of Troy. Many episodes are related to suicides, and a lot of them described men in the act of  killing themselves and their wives. Exactly as we can see here, inside the Palazzo Altemps Museum of Rome.

Booking.com
Booking.com
My name is Gianluca and I'm a professional and local tour guide in Rome. I feel very lucky because thanks to my job and my passion I have the opportunity to share with you the beauty of Rome. Moreover I…
Read More