Michelangelo’s frescoes in the Sistine Chapel have always been the object of an infinite admiration by tourists from all over the world.

However, not everyone knows about the dangerous moral and ethical messages that Michelangelo was forced to hide in order not to risk losing the prestigious papal commission, his fame or even his life.

But let’s go step by step. First, Michelangelo frescoed entirely alone the Last Judgement in just five years. Commissioned by Pope Clement VII, the artist began the work in 1536 and finished it already in 1541, when it was discovered to the public under the pontificate of Paul III Farnese. At that time, the Protestant Reformation had already begun. Therefore, the Church had found itself terribly attacked both in the ethical sphere (for the rampant corruption, simony) and in the doctrinal-theological one. In fact, a more adherent interpretation of the Holy Scriptures and a return to early Christianity were required.

The Last Judgment, taken from the book of the Apocalypse of John, was an iconography  typical of medieval culture, but not very widespread in the renaissance. The scene represents the moment of the end of time, in which “Christ is called to judge the living and the dead”.

Michelangelo’s iconographic, formal and ethical renewal of such an ancient theme aroused not only an infinity of reactions at the time (strong criticism from the Church; admiration or amazement), but even revolutionized the “manner” of painting for the following generations.

Michelangelo conceived the Last Judgement through a turbine structure, at the center of which at the top is depicted Christ the Judge, caught in the act of pronouncing the final verdict and next to the Virgin, while the other figures surround them. The reaction of humanity is shocking and dramatic: everywhere we see cries of pain and desperate expressions. However, not only the damned, but also the Virgin Mary and the holy martyrs are terrified of the future Revelation.

Among the numerous martyrs, Saint Bartholomew is the one who perhaps more than the others deserves attention. We thus discover the first of the many secret codes that the artist wanted to conceal in the largest and most revolutionary fresco ever made by a single painter.

Under the figure of Christ is depicted Saint Bartholomew, caught in the act of holding his skin and the knife with which he was skinned alive, according to tradition. The saint’s skin shows the face of an old man, with features deformed by suffering. That face is nothing more than Michelangelo’s self-portrait, an expression of the malaise of his soul and his concern for his own destiny.

So the artist wanted to insert his own “signature” in his masterpiece, a rare aspect at that time, because it was often forbidden by the Pope. 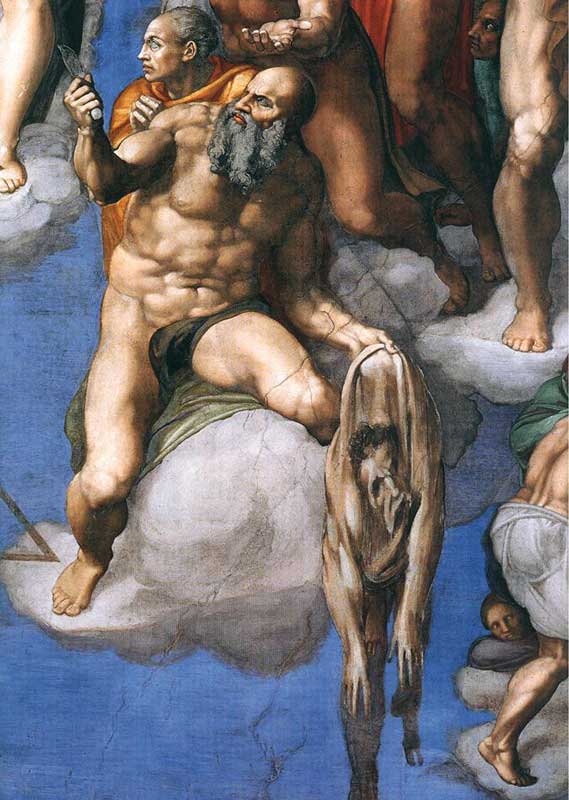 But the surprises do not end here! I reveal another curiosity often not noticed by tourists.

In the upper-right side of the fresco, under the column of the lunette, are depicted tiny naked figures of men and women intent in very affectionate attitudes, as well as a young man caught in the act of kissing the beard of an old man. How could we feel today seeing such “pagan” images painted in the most sacred place in the Christian world? 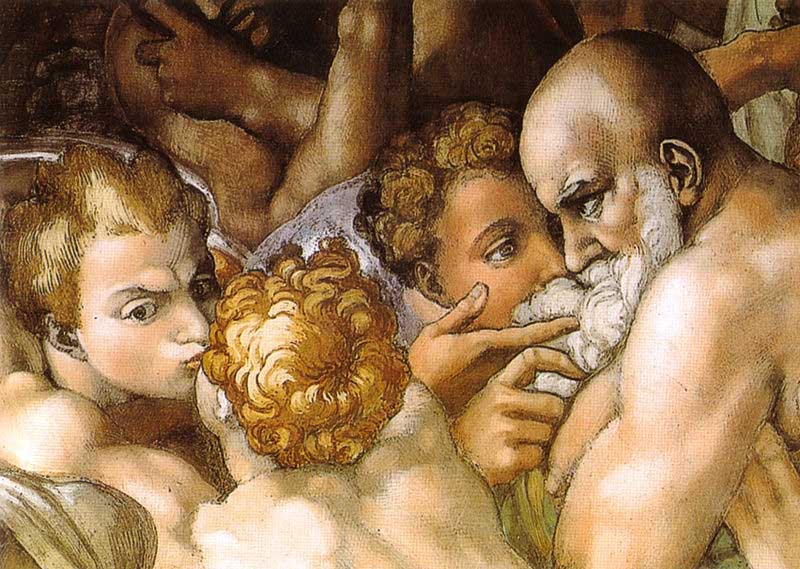 Certainly what can be said is that in the history of the Church of sixteenth-century Rome, this fact would have been a great scandal if it had been clearly discovered! Michelangelo hid it very well and he was a genius in this too, it must be admitted.

Wish to be guided on this tour? Come with me to discover the other secrets of the Sistine Chapel and the revolutionary personality of Michelangelo, the Genius of all time!

Booking.com
Booking.com
I'm a licensed tourist guide and art historian born in Rome. My studies and my job have always been connected to my passion for the art and culture of my city. The guided tours that I offer aren't only a…
Read More