Perhaps you did not know, but in the heart of Rome, it is possible to admire one of the smallest inhabited  islands in the world, if not the smallest: the Tiber Island.

The waters of the Tiber have always surrounded it, as the numerous legends that over the centuries have given it a unique and fascinating character.

But what is its origin? The first legend describes that the Tiber Island was created by arranging piles of sheaves of wheat that Romans threw into the Tiber as a sign of contempt when they chased the king out of Rome. And yes, the owner of those sheaves was the King Tarquin The Proud. The accumulation of these sheaves, arranged one on top of the other,  formed the first nucleus of the island. In any case, whatever its true origin, its importance was mainly linked both to the crossing of the river and its proximity to the ancient Porto Tiberino, the first commercial and port complex of Rome.

But there is more: what immediately cactches the eye is its curious architectural structure, reminiscent of a ship. 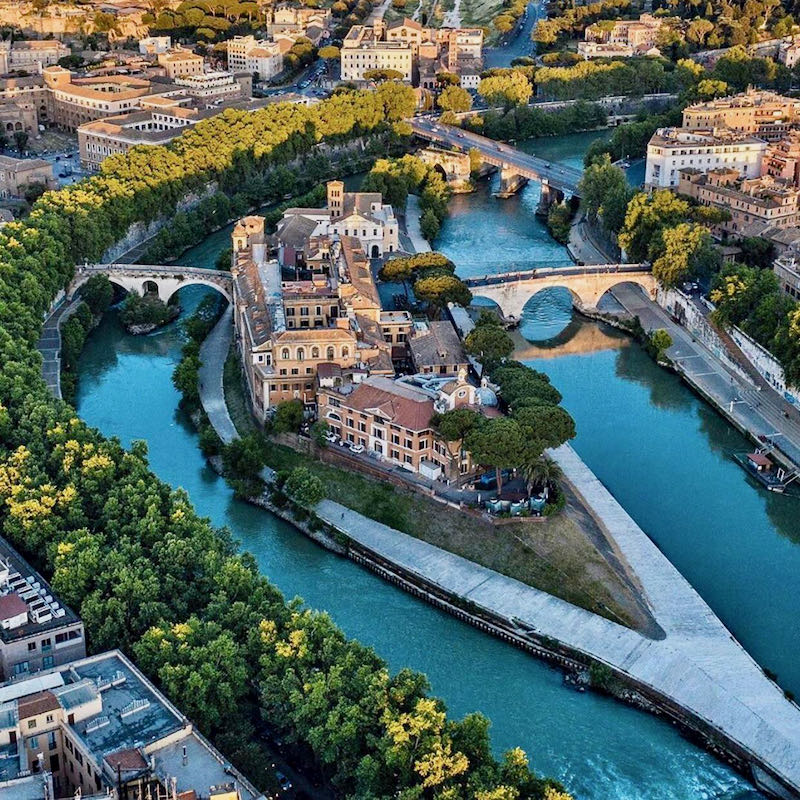 The most famous legend says that, due to a plague epidemic in 293 BC, a roman ship sailed to Epidaurus in Greece, the sacred city of Aesculapius, the god of healing (whose symbol is a snake) to ask for help.

During the sacred ritual, the snake came out of its temple and took refuge in the ship: this was the sign that the god wanted to move to Rome.

Once in Rome, the snake suddenly jumped from the ship and swam towards the Tiber Island, where it disappeared indicating its new home. In the meantime the plague ended and, to commemorate the miracle, the Romans gave the island the shape of a ship with a prow and a stern, enriched it with temples and covered it with marble.  Finally, the Romans placed an obelisk that served as a mast in the centre of the island, as can be seen in many ancient engravings.

But the curiosities do not end here!

The column surmounted by a cross located in the centre of the present Piazza di San Bartolomeo all’Isola, stands on the site of the ancient obelisk – the main mast of the Island. Even the Church of San Bartolomew (built in the Middle Ages) overlooking the square, lies on top of the ancient foundations of the Temple of Aesculapius, built in 289 BC.

Let’s go down the stairs from the square in front of the hospital “Fatebenefratelli” and continue towards the south side of the Island. We can admire the remains of the ancient marble lining of the Tiber Island, curved like the prow of a ship, with the snake twisted to his stick, symbol of the God Aesculapius.

Finally, the “Fatebenefratelli” hospital, which dominates most of this island’s territory, deserves attention.

The hospital, founded in 1585 by order of Fatebenefratelli, was enlarged in the XVIII century and completely modernized in the 1930s by the architect Cesare Bazzani. The hospital was used as a refuge for many romans Jews during the Second World War. Thanks to the invention of a disease, the so-called  “k disease“, by Dr Giovanni Borromeo and Adriano Ossicini in 1943, many people of the Jewish religion had their lives saved. This was a courageous gesture of great human solidarity.

In this regard, the island was the point of connection between the Jewish settlements on both sides of the Tiber since ancient times and not only …

Sites:
www.romasegreta.it
www.romanoimpero.com
Booking.com
Booking.com
I'm a licensed tourist guide and art historian born in Rome. My studies and my job have always been connected to my passion for the art and culture of my city. The guided tours that I offer aren't only a…
Read More